This is the making of a fascinating docu-series on prime time tv. The children of the children of the children of Israel are finally on their own. Their ancestors witnessed the greatest miracles of the OT – now God had been watching them to see if they could survive on their own free will and lean to Him – or if they would turn to their petty ways and false Gods with those filthy Canaanites. So in this chapter we have our first three judges introduced – along with adultery, obesity and assassination. But the real message is clear – God is testing them. ‘God wanted to test Israel to prove their faith in Him – and also to improve their reliance on Him. God does this because He wants us to live a life of true partnership with Him.’ (Guzik)

‘In the time of the judges, God always sent Israel a deliverer (or judge) to rescue them from the consequences of their sin and folly. The people of Israel went through cycle after cycle of defection, discipline, and deliverance. They didn’t have to continually wobble from deliverance to defection and back again, but that was how they chose to live. The Israelites had free will and could have chosen obedience to God. Instead, they chose to compromise with sin. That’s the tragic lesson of the book of Judges.’ (Yousseff)

“These are the nations the Lord left to test all those Israelites who had not experienced any of the wars in Canaan”
‭‭Judges‬ ‭3:1‬ ‭NIV‬‬‬‬‬‬

God puts us here to be on mission 24/7. To be tested every day of our life. This is not the work of a mean God. It’s the work of a Father who knows He can expect better of us. When we pass the tests the reward for us is Joy – Health – Peace - Provision & True Love. Isn’t that really all we are looking for anyway?

So what do these tests look like today – thousands of years after the Judges were trying to manage the Israelites & the tempestuous Canaanites?? And how do our first three judges handle this gnarly situation?

The first judge was Othniel and his primary goal was to rescue Israel from the sin of ungodly romance. Lonely hearts can be the biggest test God gives us. How will we handle the lonely heart? If we are not comfortable with exploring a life long relationship with God and God alone then it will be very hard to find the partner God meant for us because we are just trying to fill a hole with the first half-way suitable person that comes along. This emptiness drives humans to sinful relationships such as adultery, partnering with a non-believer, and reckless sexual relationships outside the boundaries of life long commitment. Judges can be interpreted as racist with its forbiddance of “intermarriage” rhetoric. The intermarriage it refers to isn’t racial. God doesn’t care about that! It is referring to marrying people who are not aligned to God in every area of their life. If you are aligned - and your partner is not aligned - that is a problem for God. You do not date to be on the mission field winning people to Christ. You date to find a life partner, not to occupy loneliness. We are called to be so confident in Gods love for us that a partner doesn’t complete us - they just enhance us.

Othniel rallied Israel & the nation was quiet for 40 whole years before they once again got ants in their pants. “ The cycle continues: Israel sins and is sold into servitude.“ (Guzik)

“But the People of Israel went back to doing evil in GOD ’s sight. So GOD made Eglon king of Moab a power against Israel because they did evil in GOD ’s sight. He recruited the Ammonites and Amalekites and went out and struck Israel. They took the City of Palms. The People of Israel were in servitude to Eglon fourteen years.”
‭‭Judges‬ ‭3:12-14‬ ‭MSG‬‬

The Bible is pretty blunt about Eglon and his obesity. The Bible also describes Ehud in more detail than the other two judges in this chapter discussing his propensity to use his left hand. In OT times this was considered a malformation and people were typically forced to use their right hand - or they were cast from the community.

I love the way God uses His Word to give us a complete vision of the message of each story in the Bible. In these few verses I can close my eyes and envision these two men. There is the fat, lazy, mean King Eglon laying around with servants doing all of the work for him. We have all known people like this - mean and lazy - sometimes we see these traits in ourselves. Ouch.

And then there is Ehud who swoops in to save the Israelites - tall dark & handsome. Wild romance-novel hair with a tenacity to use his left hand despite the culture. We are called to be like Ehud!! Use your left hand - and your double edged sword - and the position you’ve been given to stand up for the people of God. These are your gifts - not your inequalities.

Now Judge Ehud is sent to pay a tribute to Eglon and while on the mission he murders Eglon with a double edged sword. Before Ehud kills Eglon he says “I have a message from God for you: Ehud certainly told the truth when he said this. The message was, “Those who oppress the people of God touch the apple of His eye and will be judged for it.” (Guzik) By the time Eglon’s servants discovered their dead king, Ehud had escaped.and Ehud went on to lead the Israelites in victory over the Moabites.

King Eglon teaches us about the sin of laziness, complacency and meanness. God won’t tolerate it. We are called to be Ehuds - confident in who God made us to be. Overcoming evil, delivering the message of God, and stamping out the laziness, complacency and meanness that lies beneath our own skin. We can see these things in ourselves and know it gets us no where. Laziness is not tolerated on the mission field for God. Complacency will not move us toward being the person God has called you to be. And meanness makes our Father cringe. I love the words of Michelle Obama (put away your political preferences, she is a smart cookie). 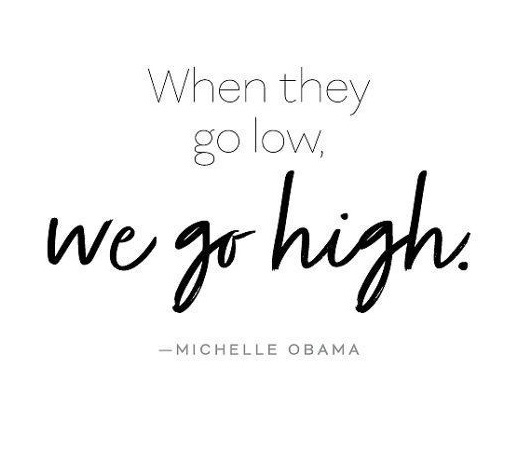 At last in Judges 3 we have Shamgar. “Shamgar son of Anath came after Ehud. Using a cattle prod, he killed six hundred Philistines single-handed. He too saved Israel.”  Judges‬ ‭3:31‬ ‭MSG‬

Shamgar teaches us about the sin of entitlement and thinking we just don’t have enough, we always need a little more to get ahead. All Shamgar had in his hands was a cattle prod (referred to as an Ox goad in other versions of the Bible). But he used it to defeat SIX HUNDRED MEN and rescue a nation. And we don’t think we have enough to conquer our battles?? If we are on the mission field on this side of heaven - and we are aligned with God - then whatever He has given us is enough. Whatever is in our hands will conquer the enemy.

Kindness, love, tenacity, confidence - these are the weapons that will conquer our oppressors.